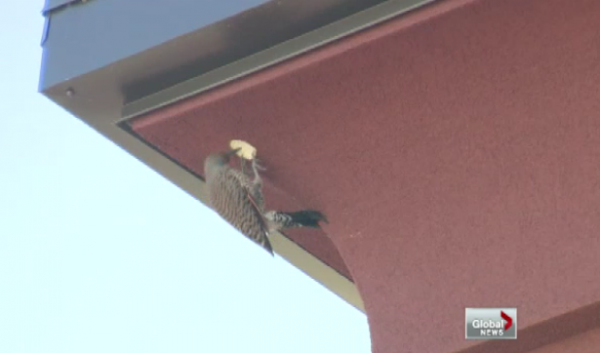 In April 2013, EIFS Armour was featured on Global News Okanagan to talk about woodpecker damage to EIFS-clad buildings and our revolutionary solution to the problem. Blaine Gaffney reported on the story, visiting the Sterling Centre Professional Building where woodpeckers had created holes and were nesting in walls that were just a few years old.

“We were recoating the building with our patented EIFS Armour solution,” EIFS Armour explains. “According to a contact at Capri Insurance, the woodpeckers are causing more than a million dollars in damage to EIFS buildings in Kelowna each year.”

At the Holiday Inn Express, flickers were a recurring problem and Gaffney spoke with Michael Wynne, the General Manager, about the problem. Wynne said that the flickers had become more aggressive and the increase in holes was becoming a significant recurring expense.

Using our patented EIFS Armour, we are able to provide business owners in the Okanagan Valley and beyond with a solution to woodpecker damage. We are so confident in EIFS Armour that we offer a lifetime warranty against bird nesting, making it a sound investment for your company.